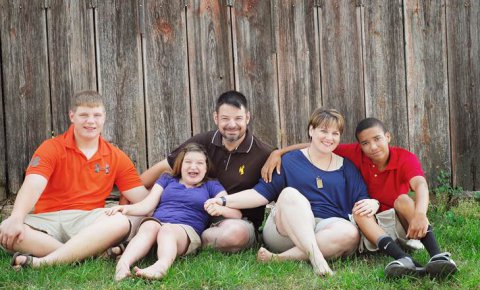 Jerry and Keira Gross decided to expand their family by adopting Duncan. Duncan was a 16 year old boy who was seeking a forever home.  As with any addition to a family, transition must occur…whether it's the birth of a child, or an addition through foster care and adoption.

“From the beginning of our interaction with KVC, we always knew that Duncan was going to be our forever family,” says Jerry.

“Bringing Duncan into our family has not only changed us, but it's changed him as well. He’s been given new opportunities, adventures and possibilities. It's amazing what structure, guidance and hope can give to a child that wants to be loved,” said Keira. Duncan is doing well in school with A's and B's in his classes.

The Gross family reports that KVC was instrumental in assisting them in the adoption journey and answering any questions they had along the way. “Our training allowed us to network with other families and to develop the support system we need to help us,” reported Jerry. 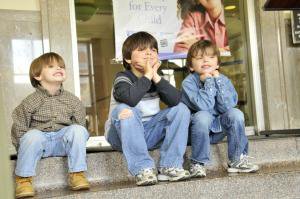 I am a proud momma of three beautiful little boys (ages of 3, 5 and 7), and a devoted wife to my husband of 14 years.

My husband and I are not able to have children of our own. We spent many years yearning for children, so we knew instantly that adoption was our choice. The question was where to begin with agencies, and should we try a private adoption agency or should we think about agencies that foster to adopt.

Our top concern was for us to be comfortable confiding in an agency. We knew we would have to share our personal life story and our deep longing to have a family. My husband is a very private person and would not confide in just anyone.

We spoke with two different agencies and did not feel at ease. We felt that papers were thrown at us to fill out, and the expectation of a successful adoption may take a considerable amount of time. My husband and I thought we would take another chance and talk with our local KVC agency. We felt an instant warmth and compassion from our first appointment.

We chose to complete our training classes through KVC and went on to receive our foster-to-adopt license. Our experience was a roller coaster of emotions, but throughout our entire process we were able to “lay our burdens down” because of the support of our “TEAM” at KVC. I would love to say our “TEAM” at KVC is our family! Our KVC family shared their time, compassion, dedication, knowledge, expertise and genuine personalities.

Our prayers, our faith and our patience were rewarded by the miracle of adoption through KVC. Thank you KVC, we love you! God bless you for your support! 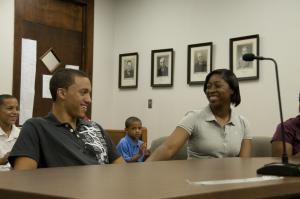 One day as Judi Harris was looking through KVC adoption profiles, she came across a child with an I.D. number that matched her birth date. “I looked at the profile and thought maybe it was meant to be,” said Judi.

His name is Zech. He was 14 at the time, and he had been hoping for a Forever Family to call his own since he was four. Judi was living in Wichita, and Zech was living in Kansas City and didn’t want to move, so the adoption didn’t happen.

Judi adopted two boys, 3-year-old Michael and 4-year-old Christopher. But Judi’s family wasn’t quite complete. She called her case worker and found out that Zech was still available for adoption, so she tried again. “Something drew me to him and I just kept going, even though he had kind of rejected me,” said Judi.

This time “it just happened,” said Zech. Judi dressed up Michael and Christopher and took them to pick up Zech without telling any of the children what was going on. When they arrived at the courthouse, Michael asked her, “Are we here to adopt Zech?” And after a 3-year-long journey, they finally were. The adoption came as a surprise to all three boys, but Christopher and Michael were excited to be getting 16-year-old Zech as a big brother. Zech said the best part about his adoption day was “everything.”

Today Zech is a sophomore at Wichita Southeast High School in Wichita, Kansas, where he has been living happily with his new Forever Family for more than a year. He plays basketball and is interested in law and sports.

“I love Zech so much, and he couldn’t be a better kid,” said Judi. “Everyone Zech meets tells me how wonderful he is, and I almost want to gloat because I already know it.” 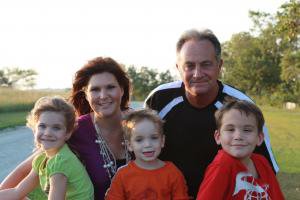 It is often said that angels are all around us. One of KVC’s foster and adoptive families was recently honored by the Congressional Coalition on Adoption Institute as one of its Angels in Adoption. Although their wings are not visible, Kathy and Lon Ostrom are truly guardian angels to many of KVC’s foster children. They have fostered more than 20 children, providing a safe home for KVC kids, including trauma and abuse victims and children with high medical needs.

Eli, who is 3 and his sister, 20-month-old Annie, came to KVC after the death of their biological mother. During this difficult time, the Ostroms fostered Eli and Annie and provided the love and support necessary for them to heal emotionally.

Then the Ostroms began fostering 3-month-old Skylar, who needed care to heal physically after he was severely abused. When they took him in he had bruises and broken bones, and they wondered if he would ever recover.

Hope came after a few weeks of nurturing and caring for Skylar. “I remember holding him one afternoon while giving him his bottle,” Kathy said, “when he looked at me and sighed as if to say, Finally, I’m safe; I’m home.”

The Ostroms continue to foster KVC kids, even though they will soon have six children of their own.

Children That Need a Forever Home